If you walk along 93rd Street and Columbus Avenue in Manhattan and look up...you will see many Puerto Rican Flags tied to a "cable or clothes line" crossing Columbus Avenue. It is a beautiful sight; you can tell that the flags have been waving in the wind for years as a testiment of our presence. However, many of the flags were worn beyond recognition.

Do we need a campaign to replace the Puerto Rican Flags in the neighborhood with brand new, clean Puerto Rican Flags or add the new flags to the existing flags? Would it create a surge of pride within our community or would there be significant resistance from the constantly changing demographic. 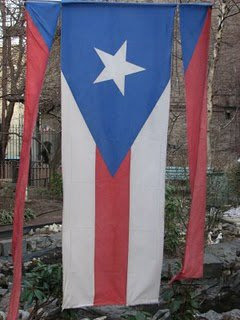 Posted by Rafael Domínguez at 12:36 AM

Induction of National Puerto Rican Day Parade's Board of Directors 2010

The National Puerto Rican Day Parade Inc. has inducted their Board of Directors for 2010-2014.  All of the following individuals were duly sworn in by Bronx District Attorney Robert Johnson in October 2010:

Posted by Rafael Domínguez at 5:36 PM

It is the largest outdoor celebration of ethnic pride in the United States with over two million spectators from all parts of the world that become honorary Puerto Ricans for this special day.

The National Puerto Rican Day Parade has become a permanent fixture in Puerto Rican culture and serves as a major outlet for community empowerment and preservation of our heritage for generations to come. We hope you enjoy the content of this blog and contribute as often as possible.